Luck in Trading and Favorable Distributions

The role of luck in (algorithmic) trading is ever present. Trading is undoubtedly a field that experiences vast amounts of randomness compared to mathematical proofs or chess, for example.

That being said, a smart trader must be conscious of the possibility of outcomes and not just a single outcome. I spoke about this in my Chatwithtraders.com/103 interview, but I want to reiterate the point as I am often asked about it to this day.

The point I want to make is that it is very important to understand the distribution your trading strategy comes from and not just make decisions off the single backtest’s results.

These graphs are the “distributions of outcomes” so many successful traders speak about. This picture makes it quite obvious which system you would want to trade even though system A and system B have very comparable backtests (black lines). 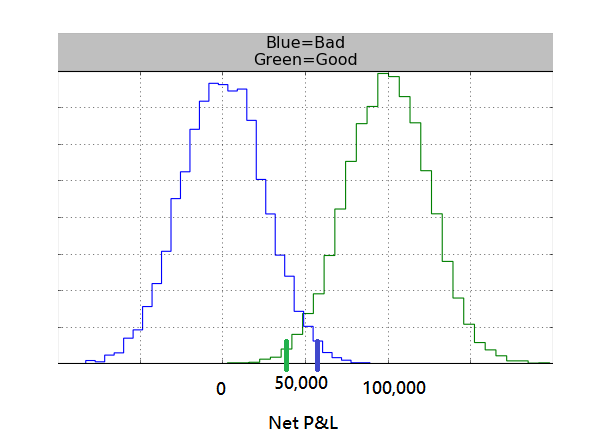 Moving forward… do you want to count on Mother Market to give system A the same extremely favorable luck? or do you want to bet on system B’s luck evening out?

I always assume I will be close to the average of the distribution moving forward which would put us at the peaks of both of these possibilities or distributions… if that is the assumption then the choice is clear.

Build Alpha licenses now come with an instructional video series or course that goes over all the features and how to use the statistical tests the software offers. It makes spotting systems and their related distributions much easier than Build Alpha already makes it.

1 thought on “Luck in Trading and Favorable Distributions”