For this week I want to discuss personal comfort regarding sample size or number of trades. I often get asked to generate strategies that are more “swing-trade” oriented and hold for days to weeks.

I have no problem with these types of strategies and Build Alpha can certainly build them. This Friday’s strategy is exactly that, but at the end I explain my thoughts regarding this style of trading.

This strategy shorts the EURUSD futures whenever these 3 conditions are true:

The exit conditions for this strategy are as follows:

As you can see these type of exits drastically reduce the number of trades (compared to say a 1 day maximum hold). Without getting technical, the more trades the lower the chances the strategy may be a “fluke”.

This strategy’s out of sample period began in 2012 which means that this strategy has had its last 20+ trades on “unseen” data and did quite well.

Some may say that is fine and they’re ready to proceed with this strategy, but others may say that this is not enough trades. This essentially comes down to personal preference.

The important note I’d like to make is… Build Alpha allows you to discard strategies that the software generates that do not have a certain number of trades.

For example, your personal preference might require at least 500 out of sample trades. If so, you would simply enter that number into Build Alpha and the software would then discard any strategies that do not trade frequently enough during the strategy generation process. 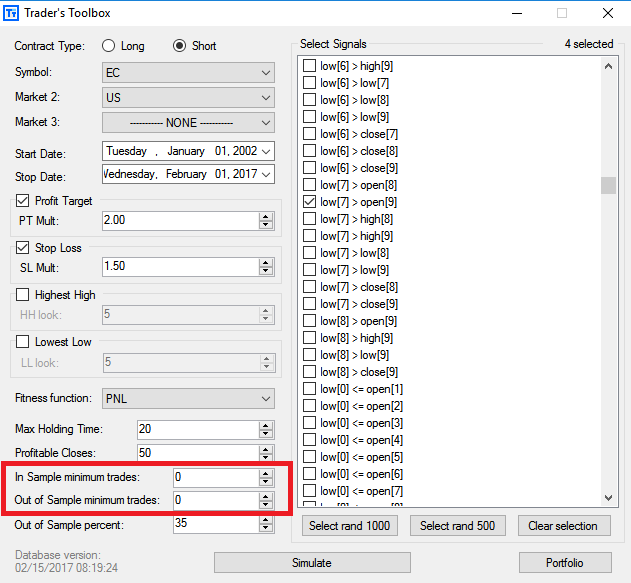 Futures And Forex Trading Contains Substantial Risk And Is Not For Every Investor. An Investor Could Potentially Lose All Or More Than The Initial Investment. Risk Capital Is Money That Can Be Lost Without Jeopardizing Ones Financial Security Or Life Style. Only Risk Capital Should Be Used For Trading And Only Those With Sufficient Risk Capital Should Consider Trading. Past Performance Is Not Necessarily Indicative Of Future Results.

This website uses cookies to improve your experience while you navigate through the website. Out of these cookies, the cookies that are categorized as necessary are stored on your browser as they are essential for the working of basic functionalities of the website. We also use third-party cookies that help us analyze and understand how you use this website. These cookies will be stored in your browser only with your consent. You also have the option to opt-out of these cookies. But opting out of some of these cookies may have an effect on your browsing experience.
Necessary Always Enabled
Necessary cookies are absolutely essential for the website to function properly. This category only includes cookies that ensures basic functionalities and security features of the website. These cookies do not store any personal information.
Non-necessary
Any cookies that may not be particularly necessary for the website to function and is used specifically to collect user personal data via analytics, ads, other embedded contents are termed as non-necessary cookies. It is mandatory to procure user consent prior to running these cookies on your website.
SAVE & ACCEPT